Discovered in 1929, the Piri Reis map, dated to 1513, was virtually unknown except by those who may have seen it displayed in its current home, the Topkapi Palace Museum in Instanbul. That all changed when Erich von Däniken made it part of his ancient astronaut theory in the 1960s. Other ancient aliens theorists have followed suit, as well as alternative historians such as Graham Hancock who, following the work of Charles Hapgood (Maps of the Ancient Sea Kings, 1966), theorized the map provided evidence of a long-lost advanced civilization. 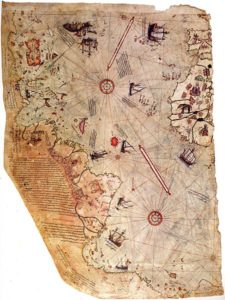 In this episode of PEERANORMAL our hosts discuss the scholarly study of the Piri Reis map, which is well known to experts in cartography and 16th century seafaring. Is it evidence of lost knowledge from a forgotten civilization? Ancient aliens?

Diego Cuoghi, “The Mysteries of the Piri Reis Map,” (accessed 2/6/2018) – an excellent resource for map visualizations